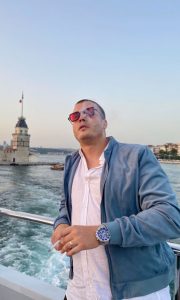 Electronic music lover since 2004. He was born in a small town of Bursa in 1987. In 2007 he went to Sofia to study. Until 2011, the lessons he listened to during the day were entering in one ear and coming out of the other, but at night when listening to the leading names of electronic music, music did not come in from one ear and exit from the other.

Although he had no training in music, he discovered that he did not hear music the way everyone hears it and did not see it the way everyone saw it. He believed that putting pieces together was a good listener and proved that it was more than just believing. Believing that music has a philosophy above all. ongunko continues to express himself by bringing together his own favorite melodies from different cultures with Enharmonica series.

One of his biggest dreams about the music is to prepare his set consisting entirely of his own tracks one day, his track trials continue and you will hear it when it is ready.

Facebook
Instagram
We value your privacy. We and our partners use trackers to measure the audience of our website and to provide you with offers and improve our own ZIROOP marketing operations. More info on cookies and providers we use. You can withdraw your consent at any time in your settings.
Personalize My ChoicesI Accept
Manage consent

Like other apps, using ZIROOP involves the storing and retrieval of information from your device, through trackers operated by us or our partners. We provide below a simple tool allowing you to tailor your choices as you deem fit in relation to these trackers. You can change your choices at any time in your Settings.
Necessary Always Enabled
Necessary cookies are absolutely essential for the website to function properly. These cookies ensure basic functionalities and security features of the website, anonymously.
Functional
Functional cookies help to perform certain functionalities like sharing the content of the website on social media platforms, collect feedbacks, and other third-party features.
Performance
Performance cookies are used to understand and analyze the key performance indexes of the website which helps in delivering a better user experience for the visitors.
Analytics
Analytical cookies are used to understand how visitors interact with the website. These cookies help provide information on metrics the number of visitors, bounce rate, traffic source, etc.
Advertisement
Advertisement cookies are used to provide visitors with relevant ads and marketing campaigns. These cookies track visitors across websites and collect information to provide customized ads.
Others
Other uncategorized cookies are those that are being analyzed and have not been classified into a category as yet.
Save & Accept